The delicate balance of hot and cool, the height of the flame and the distance from the sun. When you fire
up the grill, you’re creating your own cooking universe. You are truly the master, controlling the fiery sun
and strategically placed meat planets for optimal cook times and temperatures. Okay, so maybe it’s not that
extreme, but cooking too close or too far away from your heat source can ruin a perfectly well-planned dinner. Check out these tips for setting up your coals and recommended methods for popular cuts.

Remove any existing ash from your grill as debris can block vents needed to control temperature. Clean grates with a wire brush to remove any residue.

Chimney starters are an easy and efficient way to light your charcoal briquettes. Just follow these easy instructions:
• Flip chimney over and place pieces of newspaper in the bottom
• Fill chimney with charcoal (a standard chimney will hold 100 briquettes. You’ll only need about half than that 3-4 individual cuts) 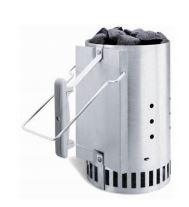 • Light newspaper with matches through the
vents in the chimney
• Wait until the charcoal has turned to white
ash and dump into grill.

There are a few great ways to create heat zones on your grill. You’ll want to have an area where meat can be cooked directly over the flame and an area where meat can be moved if it’s getting too charred or requires a longer cook time. If you stack coals in the middle of your grill, make sure you’re leaving enough room around the outside
for a cool resting place (8-10 inches)

Even the most experienced grillers don’t head for the yard without a trusty meat thermometer. Follow these easy guidelines for the perfectly cooked centerpiece. Remember, pork is best and can be served a little on the pink side. Especially if sourced from a trusted, local retailer. 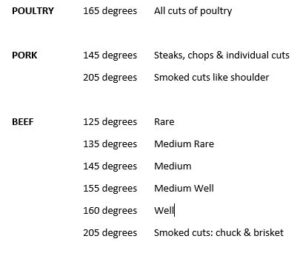 Corn Dog in a Cup 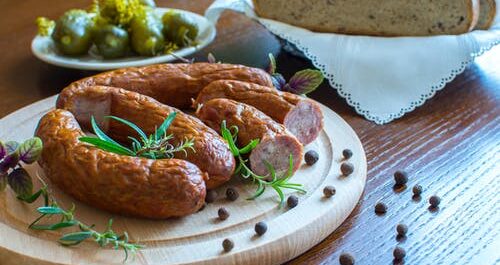 Grass feed ground beef with our traditional blend of Polish seasonings and spices. Smoked to perfection and ready to enjoy on its own or, try one of these fantastic and fun recipes below! Enjoy, Kettle Club.

To say that Hayden Holbert of Avrom Farms uses sustainable farming practices is an understatement. He speaks of his farm as an agro-ecosystem, each living thing an instrument playing its piece in the harmonious song of the land as Holbert orchestrates.

“Every organism here has a job,” Hayden explains. “We move our chickens across pasture daily so they may take advantage of the nutrients provided by the land, and also fertilize the pasture for future growth. By moving the chickens to new pasture every day and encouraging them to forage amongst the diverse polyculture of plants and insects, the result is a fundamentally different chicken.”

Holbert raises Freedom Rangers, a heritage breed of chicken known for its ability to utilize pasture and succulent flavor. These breeds tend to be higher in yellow omega 3 fat and contain less saturated fat than faster growing commercial breeds.

Freedom Rangers were initially bred out of protest of the fast-growing, industrialized breed of chicken, the Cornish Cross. They come from Northern France as part of the Label Rouge movement, which is similar to the USDA Organic Standards, but has much more stringent regulations on animal welfare with a focus on small, diversified farms. In addition to their superior flavor, Freedom Rangers are equipped to thrive in the outdoors and transform grasses, bugs, and grain into highly nutritious food.

“Choosing chicken breeds that are slow-growing is an important part of producing chicken with extraordinary flavor,” Holbert explains. “A chicken that has taken longer to grow will have more complex proteins, antioxidants, and vitamins than the 5 week old turbo-charged chickens common throughout nearly every grocery store in the United States.”

Hayden has been raising his Freedom Rangers chickens, heritage pork and even vegetables and mushrooms since he took over the family farm a few years ago. The land has been in Holbert’s family since his grandfather purchased the property in the 1950s.

“I’ve known since the age of six that I wanted to be a farmer,” Hayden says. “I grew up in Chicago but spent many summers enjoying the country life. Driving tractors, taking care of livestock – so agriculture has always been a big part of my world.”

Thanks for all you do for the for the sustainable agriculture community, Hayden! And thanks for the fantastic chicken!

Get the Most from Your Beef Roast!

Hey, we get it. You’re tired of eating the same old traditional pot roast. We’re here to help. Here’s a few ideas on how you can stretch that beef roast in to some easy and delicious weekday meals!

Cook your beef roast on Sunday for easy prepping throughout the week. A good rule of thumb for cooking a roast in a crock pot is one hour per pound of roast (2 hours for your 2 lb. Kettle Club roast) on low.

For oven preparation, preheat oven to 375 degrees and cook 20 minutes for each pound of roast (about an hour for your Kettle Club roast).

Be sure to season your roast with salt and pepper and add liquid to tenderize and enhance flavor. Our famous Kettle Range beef bone broth works wonderfully for this!

When your roast has cooled, shred for easy preparation throughout the week. Store the beef in an airtight container with a little of the cooking juices to keep it tasty and tender.

Mondays can be rough. Make dinner easy. First, dice an onion and green pepper. Sauté the veggies in a hot pan with oil. When the onions are translucent, add 8 oz. of cream cheese and stir until the mixture reaches a creamy consistency. Add ½ cup sour cream and about 1 cup of your cooked, shredded roast (more if you’re wanting a meaty dip).

Ever wonder why taco Tuesday at Kettle Range is one of the most delicious days of the week? Probably has something to do with the amazing shredded beef our chefs use to create our heat and serve meals. What cuts do we use you ask? Roasts, of course! Shredded beef roasts make fantastic tacos and unlike traditional ground beef tacos, shreds can take on a ton more flavor when heated with your favorite taco seasonings.

Is your twice baked potato missing something? Turn that side dish into a filling meal by adding BBQ beef.

Rub 2 potatoes with oil and salt and bake at 300 degrees for 90 minutes or until tender. Split cooked potatoes lengthwise and spoon out insides. Combine potato mixture with 2 tablespoons of sour cream, cheddar cheese, and salt and pepper to taste. Add your favorite BBQ sauce to the cooked shredded beef. Combine the BBQ and potato mixture and return to potato skins. Cook at 350 degrees for 15 minutes or until warm. Enjoy! 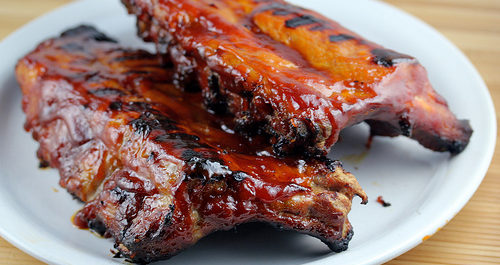 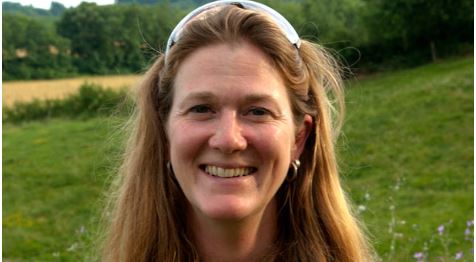 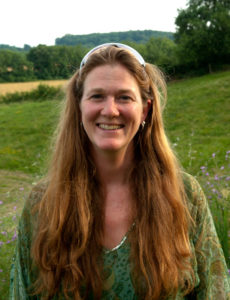 Louisa Hallewell will be traveling to Kettle Range from her sustainable farm in the Gascony region of France to teach THREE hands-on courses.

Louisa and her family moved from England to France in the autumn of 2007 on a quest to live a more sustainable and rural lifestyle. After much searching, she found her dream home, a farm situated in the rolling countryside of the Gers, with panoramic views of the Pyrenees to the south.

Louisa is the owner and operator of Little Black Pig, a cooking school specializing in teaching traditional farmhouse cookery skills to all ages and abilities.

Reserve Your Spot Today for one or of all these great classes with Louisa! 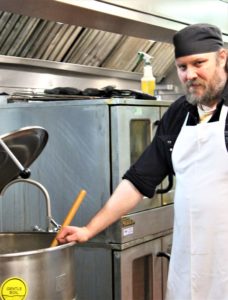 Ever wonder who’s working behind the scenes at Kettle Range Meats? Well wonder no more! Our entire staff works hard to ensure you’re getting the highest quality, best tasting meats in Wisconsin. And we want you to meet them all. First up, Chris Scallon. Chris has become somewhat of a local celebrity in the chili world. With a Golden Ladle from Potawatomi’s Chili Bowl, and a first place win from WMSE’s Rockabilly Chili contest, he made Kettle Range synonymous with great chili in 2018.

What do you do at Kettle Range?

I guess my title would be sous chef. I do a lot of food preparation for our heat-and-eat meals. Cutting, slicing, dicing, chopping, packing. I also assist in menu creation, so we can keep adding new items to our overall menu. Oh, and I man the cauldron. The cauldron is what I call our large industrial kettle. It’s where we make things like chicken and beef broth. It’s essentially where the magic begins.

What inspires your award-winning chili concoctions?

I get a lot of inspiration from the incredible products we have access to. Right from the start, we’re sourcing quality meat from local farms. We have a talented butcher staff here that can create amazing products from those meats, like sausages. Those flavors inspire innovative ideas for meals, chilis and side dishes. The Ropa Chili (Rockabilly Chili contest winner) stemmed from one of our heat-and-eat meals, Ropa Vieja. The distinct flavors were incorporated into what turned out to be a delicious and unique chili.

What do you enjoy most about your job?

The freedom to create new things. We love getting feedback about our meal program. It’s a great feeling to put out a new meal and get a positive response from our customers. Thanks for all you do, Chris!

Join Chris this weekend as he defends Kettle Range’s Golden Ladle title at the 13th Annual Milwaukee Chili Bowl. Purchase your tickets at the shop and save $5 on admission!

1 teaspoon salt, or to taste